Brian Skerry encountered his first shark underwater one afternoon in 1982, in the cool green waters off Rhode Island

The female blue shark paid little attention to the thrilled 20-year-old diver as she cruised just below the surface, occasionally glancing at him before vanishing into the murk.

Skerry recounts that first meeting in reverent terms in his aptly-titled book  the culmination of more than three decades of photographing sharks in the wild.

Sharing the water with a shark is a profound and humbling experience.

A scuba diver laboring to control breath and buoyancy can feel almost envious as a perfectly streamlined torpedo of muscle cruises by without a hint of effort. As Skerry has learned, one can only guess at a shark’s thoughts and intentions from its speed and body language.

“When I see a shark out in the blue void, I’m often praying that it’ll come close enough for me to capture an image. But sometimes as they approach, my heart will start to race and I’ll wonder what I’ve gotten myself into.” 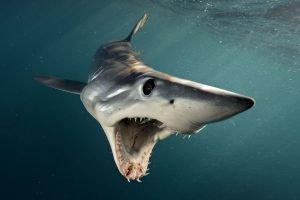 Skerry expresses deep respect for these animals, admiring every minute detail of their anatomy, crafted by millions of years of evolution. “I honestly believe that if given the chance, I could be content to spend a month just making pictures of dorsal fins,” he says

In his years of shooting sharks for National Geographic and other outlets, Skerry has worked to get face-to-face with a wide variety of species, from struggling to keep up with massive filter-feeding whale sharks to lying absolutely still in a shallow mangrove nursery for baby lemon sharks.

One of Skerry’s most memorable encounters came in 2006, when he heard reports that fishermen at Cat Island in the Bahamas were having their catch stolen by oceanic whitetips — sharks which had all but vanished from those waters.

He chartered a boat to Cat Island, and spent more than two weeks trying to find the elusive animals.

Late one afternoon, anchored near a deep drop off, Skerry saw a fin break the surface — large, rounded, with a speckled white edge.

He’d brought a cage with him, but there was no time for that. He grabbed his camera, jumped in, and found himself face-to-face with a three-meter female.

Oceanic whitetips are considered one of the most dangerous shark species, but are actually in grave danger from human overfishing. Their large fins, perfect for long open ocean journeys, make them a target for the shark fin trade.

Once thought to be the most abundant large animal on the planet, their global populations have declined 93% in just the past couple decades.

The plight of the oceanic whitetip is not unique — humans kill more than 100 million sharks every year.

While some kinds of fish can bounce back quickly from depopulation, most sharks take years to reach sexual maturity and produce small litters of pups, making them acutely vulnerable to overfishing. 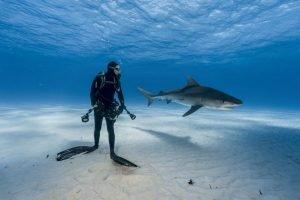 The decline of shark populations isn’t just a tragedy for the sharks, it’s a crisis for the entire ocean. Without apex predators like sharks, animals in the middle of the food chain can overpopulate and devastate prey populations, eventually leading to the collapse of a once-healthy ecosystem.

“We need to deepen our understanding and appreciation of sharks, not just for their sake but for the sake of the oceans, the planet, and our future.” – BRIAN SKERRY
Skerry hopes that by sharing his photos, he can make people fall in love with sharks, just as he did on that late afternoon in the chilly waters of Rhode Island. 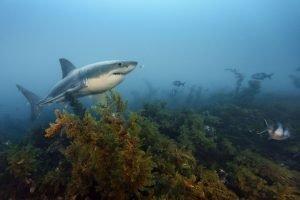 8 Foods to Eat that Will Improve Your Sex Life