An episode of Maya the Bee, an animated children’s series, has bee taken off of Netflix after an observant mother noticed the episode contained a drawing of a penis in one of the scenes. The scene in question was spotted on episode 35 of season 1, coincidentally titled King Willi.

Chey Robinson was the sharp-eyed mother who caught the inappropriate drawing. In the episode, Maya the Bee was out discovering the world when Chey Robinson discovered something herself.

On her Facebook post, which is now deleted, Chey Robinson wrote: ‘Please be mindful of what your kids are watching!! I did NOT edit any images whatsoever, this is Maya The Bee, Season 1, Episode 35. 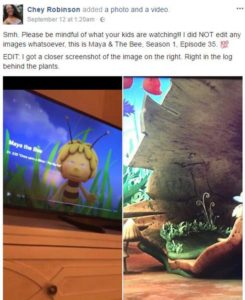 If you look a little bit closer inside the log you will find the drawing of the penis. Maya the Bee debuted in 2012, so a lot of children have had that penis burned into their memory before anyone made a public complaint about it.

This isn’t the first time inappropriate messages were hidden in cartoons. Disney’s animated films are well known for having NSFW imagery and audio hidden throughout them. This is however the first time that Netflix has been in the middle of such an issue.

The episode was pulled off of the streaming service as soon as they found out. Netflix has yet to comment on the situation. 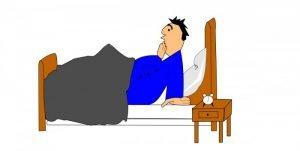 Related Story: What is with that morning wood?

Maya the Bee is a cartoon created by Studio 100 Animation, and it is based on a German children’s book series that was first published in 1912. They also produced a comic book series and two animated movies. The original writer form the early 1900’s, Waldemar Bonsels, knew his bit on controversy. Apparently, Bonsels was “an outspoken anti-Semite who expressed his approval of Nazi politics against Jews in 1933.”