Last week comedic heavyweight Kevin Hart took to Instagram saying (I) “put myself in an environment where only bad things can happen, and they did.” He followed up his statement with an apology to his kids and wife (who is pregnant with their first child).

Hart said “I simply got to do better, but I’m also not going to allow a person to have financial gain over my mistake…In this particular situation, that’s what was attempted, and I said I’d rather fess up to my mistake.”
Not to long after Kevin Hart’s Instagram video went public, TMZ published a report that “a woman has allegedly demanded money from Kevin” as she had video with sexually explicit conduct. They suggested that Hart’s video was him “getting out in front of a messy situation”

At a press conference last Wednesday Montia Sabbag, a traveling stripper that is allegedly the female caught on the video engaging in sexual activity with Kevin Hart, said “I am not an extortionist… I had nothing to do with these recordings”

TMZ recently reported that search warrants have already been executed and the information connects several suspects that they believe were involved in the attempted extraction of millions from Hart to not go public with the video.

Related Story: Kim Kardashian Apologizes for Defending Makeup Artist and his Racist Past

Meanwhile Kevin Hart has made the extortion case and the cheating part of his show in an attempt to move on from this mess. On Saturday night he told an Atlanta audience “We got a lot of s—t to talk about”. Even though Hart did not directly address the situation he did leave the audience with this promise “I’m going to come out a better man and father than I’ve ever been”.

Hart isn’t the only celebrity to learn the golden rule of Las Vegas “What happens in Vegas, stays in Vegas” isn’t actually a Nevada law. Here is a look at three other public figures that had their Vegas misadventures go public. 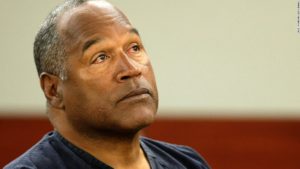 Thirteen years after he was acquitted in one of the most publicised double murder trials in American history, Simpson was found guilty of a plethora of crimes, including kidnapping and armed robbery of two sports memorabilia collectors in a room in Las Vegas’ Palace Station hotel. Simpson a former football pro claims he was just trying to get back memorabilia that were stolen from him. He may spend up to 33 years behind bars. 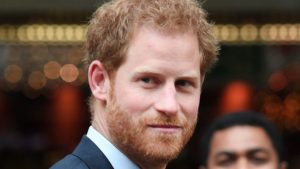 Even Royalty isn’t exempt from a Vegas Scandal. In the summer of 2012 Prince Harry spent an alcohol fuelled weekend in Sin City. Pictures of him partying with his personal body guard and several bikini clad woman at a $1200 –a-day VIP bungalow at one of the MGM Grand’s Wet Republic pool parties surfaced. This may not sound very scandalous, however a few days later pictures of a fully undressed Harry bear hugging an equally undressed female in his private suit were exposed. Apparently the embrace was following a strip pool game which I guess both players lost. 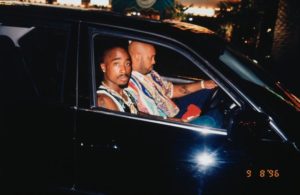 Perhaps the most famous Vegas celebrity news story is the unsolved murder of rap legend Tupac Shakur. On Sept 7, 1996 Shakur was shot several times in a drive by shooting while stopped at a red light on Flamingo Road and Koval Lane. He passed away in hospital six days later due to respiratory failure leading to cardiac arrest. Though the killer’s identity remains unknown, the shooting is widely considered a retaliation to an incident earlier in the evening following a Mike Tyson fight in the lobby of the MGM Grand. Shakur and Suge Knight (who was driving the BMW Shakur was in when shot) got into a physical altercation with Orlando “Baby Lane” Anderson as South Side Crips member. In the 2015 documentary Murder Rap former LAPD Detective Greg Kading says that the former leader of the South Side Crips and Orlando Anderson’s uncle “Keffe D” confirmed that Anderson was the one that shot and killed Tupac.