So far this year we’ve seen Logan, Guardians of the Galaxy Volume. 2 and Wonder Woman. With the imminent release of Spider Man Homecoming on the way, we will take a closer look at what Marvel and DC have in store for us.

Thor is back in the third instalment of his solo movie. Chris Hemsworth reprises his role as the hammer smashing super hero which by the look of the trailer promises to be another Marvel hit! Tom Hiddleston is back as Loki and it looks like Hulk, played by Mark Ruffalo, and Doctor Strange, played by Benedict Cumberbatch, will make appearances in the movie too.

Get Thor: The Dark World

After the so-so releases of Man of Steel (buy here), Batman v Superman: Dawn of Justice (buy here) and Suicide Squad (buy here), DC Extended Universe finally came through with a hit in Wonder Woman. They look to continue that momentum with Justice League. The movie stars Ben Affleck as Batman, Gal Gadot as Wonder Woman, Ezra Miller as The Flash, Jason Momoa as Aquaman, and Ray Fisher as Cyborg. Although not in the trailers, we are sure to see Henry Cavill reprise his role as Superman too.

The Marvel Cinematic Universe kicks off a barrage of movies in 2018 with Black Panther. The King of the fictional Wakanda first made his Marvel debut in Captain America: Civil War (buy here). Chadwick Boseman will once again carry the role as Black Panthar in this solo flick.

What happens when you bring together 10 years worth of mega block-buster movies into one film? You get probably the most highly anticipated Super Hero Movie ever! Every Marvel Cinematic Universe movie has built up to this very moment. Check back for the trailer once it is launched.

Ant-Man and The Wasp

The final Marvel Cinematic Universe movie of 2018 will be the sequel to Ant-Man (buy here) starring Paul Rudd. If you stuck around for the mid credit scene of Ant-Man (if you missed it, check it out here), you’ll see the early teaser of The Wasp played by Evangeline Lilly. It will be interesting to see how this movie carries over from the events of Avengers: Infinity War. Check back for the trailer once it is launched. 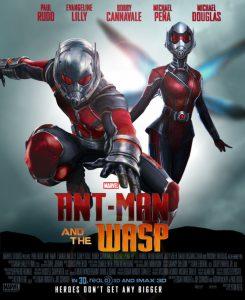 When to Avoid Rice + 8 Alternatives to Try Instead

Summers in Madrid could be as hot as those in Erbil, Iraq by 2100, research shows